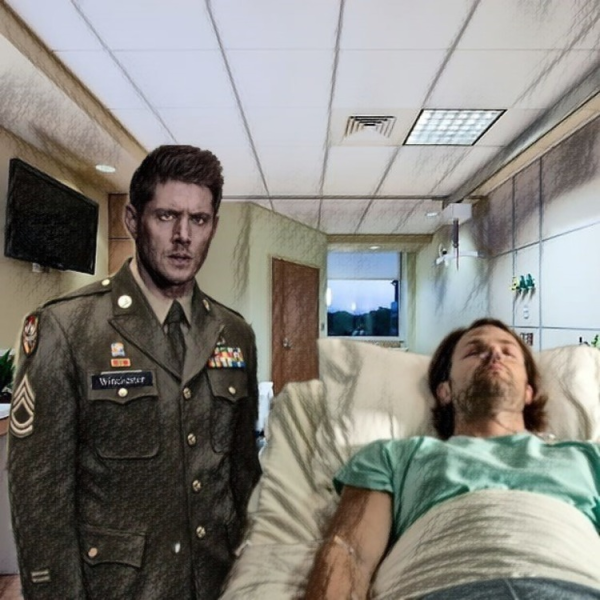 Back to Part One

Dean came to in a hospital bed, one machine beeping, an IV in one arm, and itchy spots on his chest from the EEG leads. He looked around the room and was relieved to see it wasn’t the dark one that they’d had Sam stashed in, there was a window, and there was a tree outside covered in snow. The hospital building wasn’t the kind the United States had built over in Afghanistan, so somehow he was home. He looked down at his chest to see his medals on his uniform jacket, but there was only a hospital gown. The words Sioux Falls General were stitched on it blue thread.

Movement in the chair beside him caught his attention, and it wasn’t Bobby, somehow it was Sam. His Sam, the real Sam, awake, alive, and all over him until it hurt.

“Oh god, thank god, you came back to me,” Sam said, wrapping Dean up in his arms and hugging him so hard he almost lost his breath.

“Funny, I think I just said the same thing to you,” Dean whispered, then coughed because damn his throat was dry, he felt so dehydrated, like he’d been out in the Afghanistan summer, all the moisture dried up in his whole body.

“It was a djinn, Dean. He had you for a week, I couldn’t…couldn’t find you. I’m sorry, so sorry it took so damn long, he almost—” Sam said all in a rush cutting himself off to not finish the last sentence. They didn’t say those kinds of things, a mutual superstition about naming the worst.

Dean looked up at Sam and was so damn thankful to hear his brother’s voice, to get to see the emotion on his face, after all that time of him being so deathly still in a hospital bed.

“So I wasn’t in the Marines then?” Dean asked, surprised to find that he was disappointed.

“What? No, was that what you were dreaming?” Sam asked, his eyebrows drawn up into that cute confused tangle.

“Yeah, you were in a coma, after Cas took down your Wall, and I joined up while Bobby and Eleanor were looking after you.”

“Remember Bobby’s friend, the Purgatory monster? Cas killed her,” Dean said, surprised that Sam didn’t remember something that had happened so recently.

“That was a long time ago, yeah I remember her of course. But Dean, it’s been something like seven years.”

“Oh,” Dean said, suddenly hit with the realization that Bobby was dead all over again. Well, there was the Other Bobby, the one that was with their mom, but he didn’t really count. Oh god, Dean didn’t like this. Except for the part about Sam not being in a coma. Because there was Michael and Lucifer and Jack and Cas.

“Sam, he took down your Wall, like it was nothing. Why did we ever talk to him again? I should have killed him.”

“Who, Cas? Because he’s our friend, he thought he was doing the right thing,” Sam said. “We’ve been over this, and it happened seven years ago.”

“Because he fixed me, just like he promised he would,” Sam said. “You can’t get mad at him about this all over again. Let it go, for me, please?”

Dean studied Sam’s face, he couldn’t resist the pleading in those eyes. Never had been able to, so why start now, “Letting it go, got it.”

Sam leaned down and kissed him then, in thanks or because he was glad he’d escaped from the djinn dream or just because. Who knew, he was enjoying it, Sam’s mouth so warm and his hands holding his cheeks just so, fingers trailing up to graze over the sensitive skin on his ears. Sam finally stopped and hovered just above him. “Welcome back, Dean.” Dean was floored by the smile on his brother’s face, he was glad he was laying down already.

He reached up with the non-IV hand and held the side of Sam’s face. Sam pressed into his touch and let loose with a happy sigh.

“I’m so glad you’re awake, Sammy, you have no idea how hard it was seeing you wasting away in a hospital bed.”

“Ditto, although it was a shorter time for me here in the real world,” Sam said with a grin.

“I was just telling you about how much money I was making in the Marines, I was a gunnery sergeant pulling down about three thousand a month and saving it all so we could buy a house and get a dog.”

“I was trying to tempt you out of your damn coma, dude,” Dean said.

“Is that…uh, something you’d want to do at some point?” Sam asked.

“Be a gunnery sergeant, nah, it’s a lot of hard work, too much flying in planes for me,” Dean said.

“Me too, Sammy, we’ll get there,” Dean said, wondering if holding out these impossible hopes for them was as delusional as his djinn dreams had been. He found himself suddenly resolved to make it happen for Sam. “It’s up to us, isn’t it? How long we’re in the fight?”

“Thought you wanted to go out bloody? Thelma and Louise, Butch and Sundance, all that?” Sam said with a grin.

Dean could tell how affected Sam was by his admission that he could see a future without hunting for them at some point. “Light at the end of the tunnel is what I believe you called it once.”

Sam stopped smiling and got serious. He closed his eyes and breathed in and out several times before opening them again.

Dean realized his brother was choked up with emotion, oh shit here it was. Sam was leaving.

“When are you leaving?” Dean asked, his heart in his throat.

“What, no one’s leaving, why would you ask that?” Sam asked, pushing up from the bed and towering over him. His face went thunderously angry in an instant.

“Me too. I was just about to tell you that it’s about damn time you saw the light at the end of the tunnel.”

“You ever hear about how it’s probably an oncoming train?”

“Hilarious as always,” Sam said, thankfully grinning again, the storm clouds gone. Sam walked around the side of the hospital bed, and Dean’s eyes followed him. He let down one of the arms of the bed with a creak, toed off his boots with two clunks and then tucked himself in the small bed next to Dean, holding him with his entire body.

Dean felt himself finally let go and relax into his brother’s warmth. He’d needed this, they both did. “I had to stab myself again to get out, it really hurt. The last thing I was thinking was about how hard it was going to be to explain to my CO about how I needed a new uniform.”

“You mean you came to visit comatose me in the hospital wearing your uniform, aw that’s pretty cute.”

Dean turned in Sam’s arms so that he could see him. “I was just being a good soldier, like they trained me to be.”

“I bet you looked really hot in a uniform,” Sam said, his eyes twinkling, he attempted to waggle his eyebrows.

“Damn right I did,” Dean said with a grin, leaning up to kiss Sam, hot and dirty all of a sudden.

Sam was leaning over him in a flash, their bodies still entwined, but now his hands were everywhere, he had Dean hard and panting in a few strokes. Dean could feel Sam harden against his hip as he pressed in a sinuous rhythm.

Sam’s eyes were on his, magnetic and piercing. “I almost lost you again,” Sam said, his lips open and slick, tongue probing and thrusting with every stroke of his hand.

Dean let himself hold on and press back into Sam’s thrusts, still weak from the blood loss, but turned on by his brother’s demanding mouth. Usually he’d be the one doing the demanding and pushing around. But there were times when he had to let Sam take care of them, this was definitely one of them. He got it, that desperation when you’d just almost lost your other half.

“Need it, Dean, give it up for me, c’mon,” Sam begged, panting into his mouth.

Dean groaned and kissed him back, hard and just as demanding. He’d just been in a world where this wasn’t ever going to happen again, where his Sam had been gone, Sleeping Beauty on a bed, absent from the world. But this Sam, here in the real world, was hot and heavy and oh god so perfect above him. “Sammy,” Dean heard himself say in a strained gasp as he came, pulsing over his brother’s hand, making a mess out of the hospital gown and sheets.

“So hot, Dean, coming for me like that,” Sam said, panting and still thrusting. He soon joined Dean in making a mess of the hospital linens.

“The nurses are gonna love this,” Dean snarked as Sam cleaned them up with a corner of Dean’s gown,

“Don’t really care at this point, they can think what they think,” Sam said, tucking himself away. He settled down to hold Dean again. “You should get some sleep now.”

“Be here when I wake up?” Dean asked in a sleepy mumble. He shouldn’t be so surprised that one orgasm had really taken it out of him when he was so weak from blood loss.

“Of course, just…you gotta dream about the light at the end of the tunnel with me,” Sam said in a matching sleepy mumble.

Dean dreamed then, not of wearing a uniform, glowing blue patterns on djinn skin, or long-dead loved ones, but of a little house, that they lived in together. He dreamed about the big dumb dog Sam adopted from the pound, and the garage he got to park Baby in every night. Turned out it wasn’t an oncoming train after all.