Sam woke up the next morning, stiff and sore on the concrete floor. Someone had draped a wool blanket over him while he’d slept. He stared up at the Ma’Lak box, impressed all over again that his brother had made the thing. He couldn’t hear Michael bashing against it from inside, which had to be a good thing. Sam heard footsteps and the door opening.

Sam sat up with a groan and blinked at the light from the hall bleary and fuzzy. “Thanks, Ro, we owe you—again.”

“That list is getting pretty long, Samuel. I’m glad it all worked as planned. Now that the world is safe for a while, I’ll be off.”

Sam tried to smile and waved as she left. He slowly got up from the floor and stretched, reaching his hands up to brush the beams of the ceiling.

“Sam, I’m taking Jack to look at what might be a poltergeist in Indiana,” Cas said through the open door.

“Bye you guys, thanks for the help,” Sam said, gesturing at the box behind him.

“We were glad to help, and we’re happy you’re yourself again,” Cas said.

Cas immediately nodded. Jack squinted at Sam, “You look like just plain Sam to me. I’m glad because King of Hell Sam was kind of a dick.”

Cas and Sam frowned at Jack’s language, but neither of them said anything, Jack was right. Jack walked down the hallway away from them and Cas leaned in to speak quietly into Sam’s ear.

“Your brother may have a harder time unseeing it. I tried to explain to him what you’d done, but I think he may need to hear it from you.”

Sam nodded, a yawning pit opening up in his belly at imagining that conversation. “I’ll give it a try, thanks, Cas.”

Cas’ hand landed on his shoulder and briefly squeezed. Then he was down the hallway towards the garage with Jack following close behind, eager for the hunt. Sam could hear the sound of the truck starting up and leaving as he walked into the shower room.

He stopped in mid-stride—there was the knife on the floor. It gleamed red with Dean’s blood which was also smeared in streaks across the tile. Sam sighed and got a towel and some cleaner and scrubbed at the marks until they’d been erased. He wished it was that easy to erase the pain of what he’d done, but he couldn’t regret it, not when it had saved his brother.

Done with cleaning up the physical evidence of the violence he’d done to his brother’s body and mind, Sam undressed and got into the last shower in the row. He ducked his head under the hot water and tried to stop thinking of what Dean and he had done together in Dean’s mind, and instead focused on how to get him to accept what they’d done.

As he entered the kitchen, he heard Dean before he saw him, fixing a new pot of coffee, Dean’s back was no longer taut with tension and disapproval which was a good thing. At least until he saw Dean’s red-rimmed eyes, puffy from crying. His heart broke at the vacant look on Dean’s face.

“Dean, you okay?” Sam asked, leaning against the doorway, unsure whether to enter the kitchen or not. He wondered if he’d have to leave for a few days to let Dean have time to adjust. “Do you want me to leave, give you some time alone?”

Dean’s eyes flicked up to him briefly and then slid off like it was too much trouble focusing. His knuckles were white from the clenched fist around his coffee mug. Sam stepped forward into the room down the two steps, and Dean startled out of his daze, stumbling back up against the sink. The coffee sloshed out of his mug and onto the floor with a splat in the silence.

“Want some breakfast?” Dean asked in a monotone.

“No, I want…I need to talk with you first,” Sam said, pouring himself a cup of coffee and sitting down at the table. He was relieved when Dean seated himself across, focusing on his mug, sipping at the coffee slowly.

“Cas told me he tried to explain everything to you,” Sam said, hoping that would be a good opening to start this conversation.

“I did what I did to save you, you know that right?” Sam asked. Dean’s hand went to his chest, pressing into the cut through his tattoo.

“You were a demon, Sam, the King of Hell, you cut me, possessed me, and pried Michael out of my mind. Yeah, I know you did it for me, and I’m glad you did, really I am.”

“I’m just—I can’t get over what happened in there, back in my bar, you know…” Dean said, his hand migrating up to clench at the back of his neck in nervousness before tapping at the side of his head.

Dean looked up at him, surprise drawing his eyes comically wide. Sam smiled at him, slow and purposeful, putting the heat and desire he always had kept hidden under strict lock and key on full display. Dean matched him by slow degrees, and it was everything Sam had ever wanted to see on his brother’s face. He couldn’t help himself, he reached out and held the side of Dean’s face, his thumb rubbing gently against his cheekbone.

“What’s easy about it?” Dean asked.

“Everything, couldn’t you feel it, inside your head, how right it was? Meant to be, whatever you want to call it because I could, and I want to feel that every damn day from here on out,” Sam said, surprised at how straightforward he managed to sound.

Sam leaned over their two coffee mugs and the table, pulling Dean towards him with the hand still on his face and brought their lips together. He kissed Dean soft and slow, giving him time, until he finally responded, and then the relief was surpassed by the desire. It spun up between them so quickly, the coffee mugs were shoved aside, spilled all over the table, but Sam didn’t care, because Dean had somehow ended up in his lap, writhing and squirming for all he was worth against him. Sam didn’t want to ever stop or think about another thing, he just wanted this, the perfect weight of Dean against him, his warm lips and tongue, the caressing hands in his hair, on his skin. Dean was undressing him, and pulling his own clothes off before Sam fully came back to himself.

“Welcome back, Sammy,” Dean teased, standing up to get his jeans slipped off.

He grabbed something from the counter and came back, pleased grin on his face when he saw that Sam had gotten naked too. The clink of the olive oil bottle on the table and the shine of Dean’s hand disappearing behind himself woke Sam up the rest of the way.

Sam watched, fascinated by the expressions on Dean’s face, the fleeting pain and then the open-mouthed lust when it got good. Sam’s hands were on Dean’s hips, his thumbs fitting into the top of his hipbones, pressing in hard. He was imagining, even hoping he’d leave a mark, but then Dean was climbing back onto his lap, stroking him with one oil-coated hand and sinking down slow and steady.

There was a long pause where neither of them moved, they just looked deeply into the other’s eyes and searched for what they needed to see. Dean’s arms were linked around Sam’s neck, and Sam found he couldn’t hold back from moving any longer. Dean started to respond to Sam’s tentative thrusts with slow, deep circles, with an undulating squeeze deep inside, sighing with pleasure.

Sam’s hands gripped Dean’s ass, kneading and pulling it apart, then squeezing his cheeks together. He needed more, more movement. He hoisted Dean’s legs around his back, and stood up in one fluid movement, walking a few steps until Dean’s back hit the wall.

This position was much better, now he could move, he could thrust up with full power, it was everything right then, the noises that Dean was making, they were sounds Sam would never forget. The demanding, the begging, on and on as they finally possessed one another the way they’d always been meant to.

This was even better, a million times better than it had been inside Dean’s mind. Because this was them, both of them taking what they wanted, what they needed. Finally, holding up the weight of Dean got to be too much so Sam walked them back over to the table and laid Dean out on it. Readjusting Dean’s legs around his hips, he thrust back in, deeper and harder, relentless in his pace, Dean screaming out his pleasure, grasping with hands wherever he could reach. He was begging for Sam’s lips.

Sam leaned forward and kissed him, deep and hard, groaning Dean’s name into his mouth like the holy prayer of absolution it was. He heard his own name in the same tone and felt his heart break free from the confines of his chest, expanding outward and into Dean’s. It said yes and mine and finally.

Dean lay on the table, olive oil and coffee smeared in his hair, looking like the most blissed-out, beautiful Dean that Sam had ever seen. “You are so fucking beautiful, Dean,” Sam said, one hand tracing the shape of his brother’s cheekbones, down the strong jawline and further down his neck.

“No, you are,” Dean said with a soft grin that Sam realized he’d never seen on his brother’s face, not once in their whole lives together.

Sam leaned down and covered his brother, still resting deep inside of him, wet and sticky, and kissed him with all the tenderness he could muster. “I’m so glad he’s gone, I don’t know how you managed it for so long, but I’m so glad it worked,” Sam said in the safe space between their lips.

“All I remember is you saying, ‘I’ll always be there,’ and I held onto it until everything cleared up and I could breathe air instead of water again,” Dean said, panting against the slick skin of Sam’s neck.

“I’m sorry about having to cut you, and all the lying too,” Sam said.

“No sorries now, clean me up and take me to bed, you beast,” Dean said.

“I’ll show you beast,” Sam growled, hoisting Dean back up onto his hips, carrying him up the steps out of the kitchen and all the way down the hall to Dean’s bedroom. Somewhere along the way, he’d finally softened enough so that he slipped out, and the mess trickling out of Dean was smeared all over him where Dean rested as he carried him. It was a beautiful glorious mess. 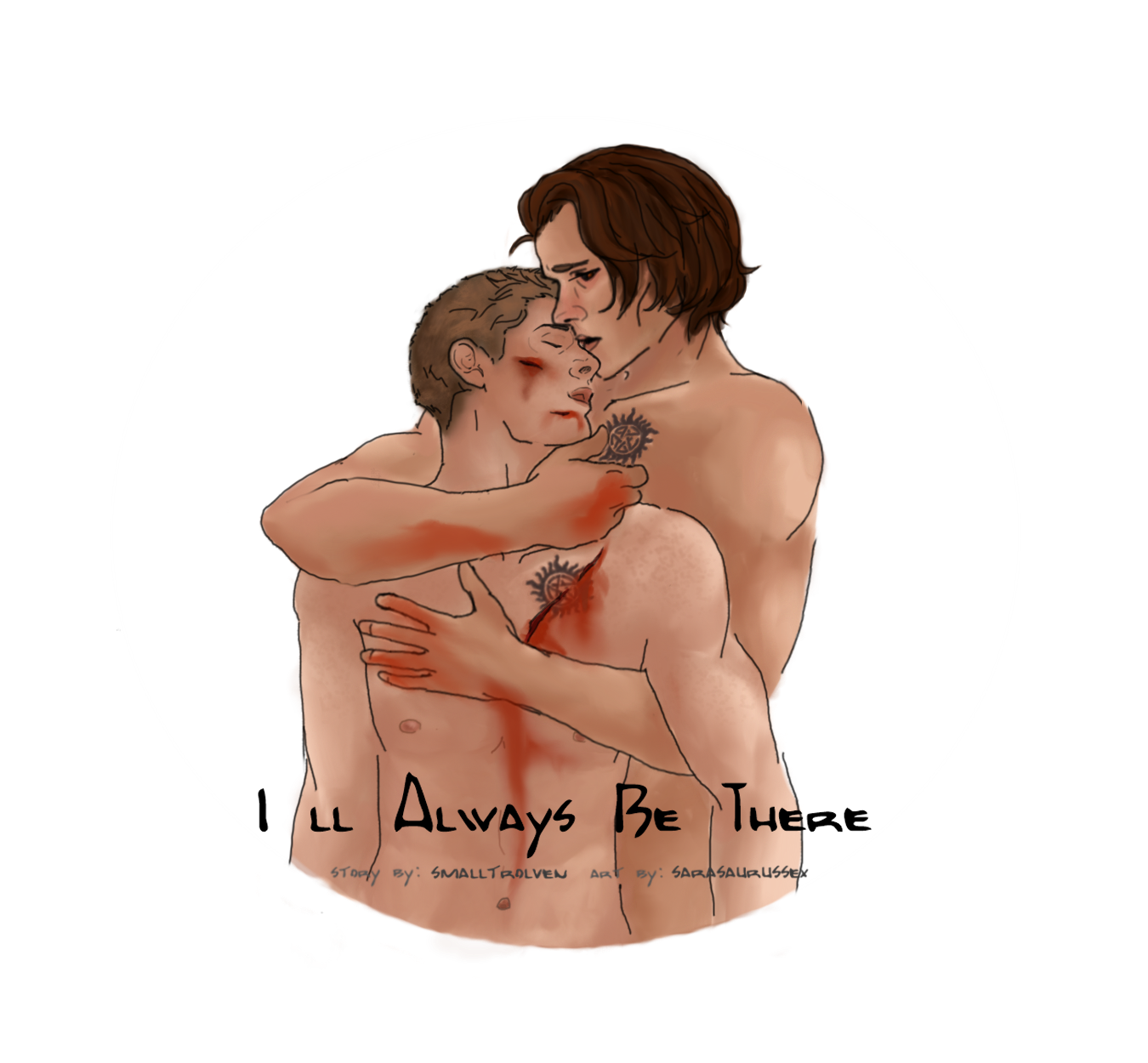