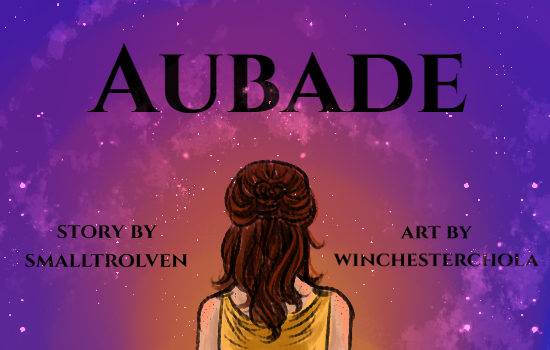 Warnings: Spoilers for season 14. Set in a divergent AU set after 14.14 “Ouroboros”.

Author’s Note: Not my characters, only my words. Written for the 2019

spn_j2_bigbang Initial story idea came from the word of the day, aubade, which is a noun meaning: morning song, poem, or music.  Here’s a lovely example on classical guitar. The etymology of the word led me to elflock which figures into the story also. Thank you to

jerzcaligrl for all the beta work, I appreciate the wrangling all of my errant commas.

Summary: Sometimes the place you live requires a lot more upkeep than you’d ever imagined. Dawn breaks over the lands that surround the bunker, and things are never the same for Sam and Dean. They each have half of the day, dusk to dawn for Sam, and dawn to dusk for Dean to both figure it out. Cas, Jack and Mary help the brothers discover the deals the Men of Letters made with four ancient beings who have been protecting the four directions around the bunker. It was all for a good reason, and the brothers didn’t know, but they still must pay the debt that is owed. In the few moments the brothers have together at dusk and dawn, the relationship once severed is re-made into something unbreakable.

Make sure to check out the always amazing stargazingchola's art masterpost here on LJ.