Yes, that's a very good title for the episode.  Suited it thoroughly.

On the whole I know it was a necessary episode, to bring to a close the "past year" stories of Amelia and Benny, but yikes was it ever painful to get through. I predict this will not be an episode I ever re-watch. 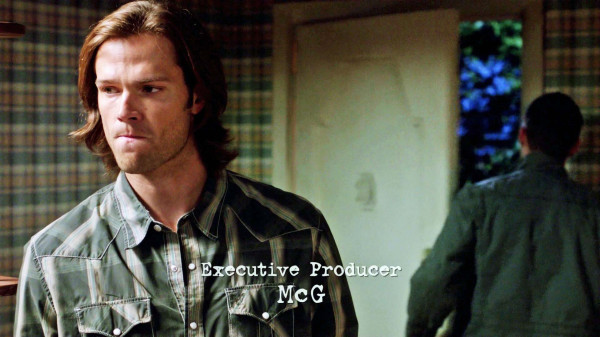 Dean was being uncharacteristically mean and/or rude to everyone (except Benny), and was very unlikeable throughout the episode.  It was understandable though.
I think it was just him projecting his upset with breaking up with Sam onto his interactions with everyone else.  Since he can't sit down and "feel his feelings", he takes it out on everyone he comes into contact with.  But I did love it that Dean left Sam for once.  (It's about time!)   He's put himself out there emotionally for Sam since he's been back ("I'm at my best driving down crazy street next to you."), and he sees Sam struggling with the choice to stay with him.  And is that ever hurtful, that it's even a question for Sam.  So he did the self-protective thing of leaving, which was a good and healthy choice. Seeing him snoring on the couch at their place, cuddled up with a beer was really sad.

When Sam said, "The woman I love", as in not past tense. I loved how Dean was shocked and surprised.  This was new information.  He did not know that Sam loved or still was in love with Amelia.  At least it got him to grudgingly apologize for sending the text. (#2 on my list)  But yeah, it changed things for him to know that, it helped him be decent to Sam at the episode ending conversation. So now both brothers have had a year loving a woman while the other brother is considered dead but stuck in another plane of existence.  And both of them tried to stay with one foot in the relationship and one foot on the job with the returned brother.  It didn't work for either one. They end up choosing to stay with their brother.   I'm hoping that they don't bring Amelia back so she can be threatened by Crowley and then mind-wiped by Castiel just to keep it all even. Or goddess forbid pregnant (please no!), but the way they left it, looks like she's not coming back (that was #4 on my list). 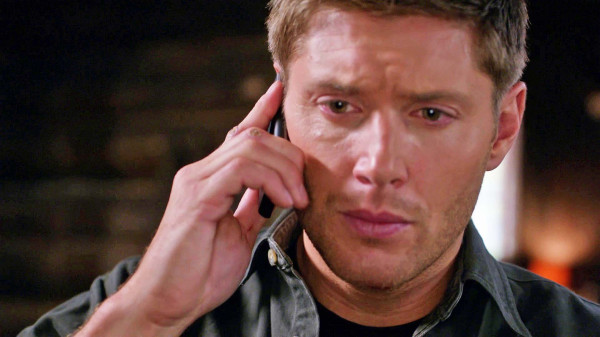 Dean breaking it off with Benny before he knew if Sam would choose to stay with him.  He was possibly going to be without friend, partner, brother for the first time ever (except for the increasingly unreliable Cas). Did he make this choice because he'd listened to the ultimatum Sam had laid down, either him or the vampire and was choosing Sam?  Or was it because Dean listened to why Sam hadn't followed his lead on the Martin/Benny case, because he was asking him to trust Benny and Sam couldn't.  Dean trusts Sam's instincts, he's had to after a lifetime of hunting together. Either way, cutting Benny off without Sam knowing about it is very Dean, I wonder if they'll bring it up in future episodes.  I do still hope that Benny comes back evil, turning either of the brothers and then the other having to kill him.  If this happens, I really hope he turns Dean (so they can hunt together forever) and then Sam has to kill Benny.  This would even out the killing Amy thing from last season and avoid another pile of guilt and angst for Dean to carry around.

Crowley was kind of boring in this episode although I was glad to see him back.  I was bummed that he didn't have any interaction with Sam, Dean and Cas. I liked the demon doctor though, for a second I thought Dean was going to hold back and not kill him at the end, they could have gotten some info out of him.  So I expected Sam to give him a hard time about it, but he didn't.

I was so glad that Dean remembered being so suspicious of Castiel's return from Purgatory. (that was #5 on my list). This tells me that he's still smart and that the writers are paying at least *some* attention to continuity this season. 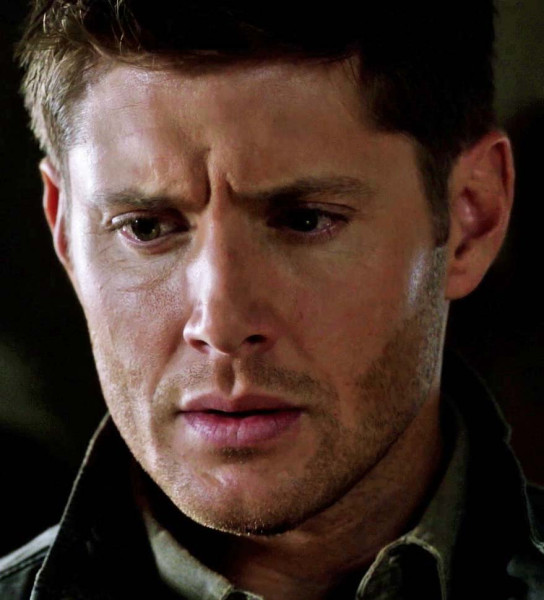 Liked getting to see Garth's safe houseboat and an alone and worn-out Kevin.  His statement about enjoying the world after he saves it really seemed to stop Dean in his tracks, maybe make him reconsider things with Sam and their mission. 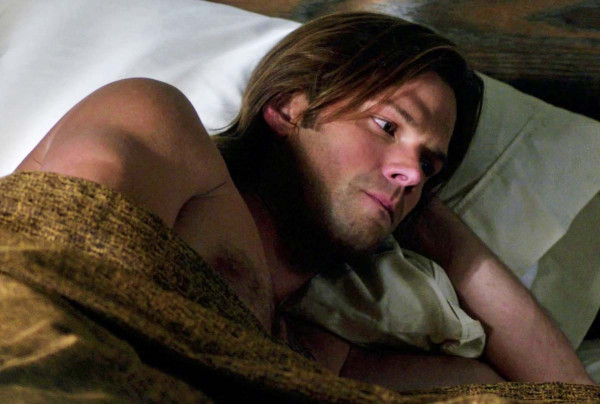 The whole Sam and Amelia sleep together thing bothered me greatly.  Not the fact that they slept together, I just didn't think Sam would do something like that, they've always painted him as this upright, in charge of the morals person, and he just beds a married woman.  Wasn't believable to me because they hadn't sold me on them having a real passionate, loving, gotta-have-you-now kind of relationship, (not judging here, just looking at Sam's characterization).  And the aftermath scene, he looked sick about it, Amelia didn't really seem too upset about the idea that she'd just cheated on her husband and that seemed in character, she seems like a take what I want and consider the consequences later person (opposite of Sam)).  As soon as she indicated she didn't know what the rest of Sam's life entailed, I knew they were over and not a very real relationship.  If Sam was with her all that time and never shared his true life's work with her, then he never really let her in.

I actually enjoyed the Naomi and Cas flipping in and out sequence, she's very believably menacing.  And yes! Of course the angels would be worried about an angel tablet.  I think the angels that Naomi is leading are worried about Sam and Dean finding out about it and locking them away from Earth forever, so they'll never be able to bring on the Apocalypse.  That's why the interest in having Sam and Dean spied on by Cas.  I did not enjoy the Cas collapsing bit, it didn't make much sense, and wasn't believably acted, it actually made me laugh. The rest of Cas in this episode was pretty good though, I was surprised by how un-annoyed by him I was. 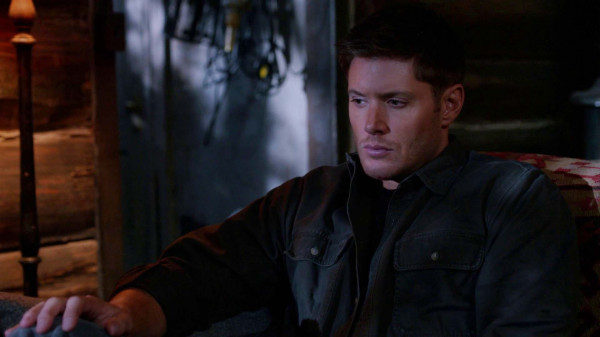 The ending sequence was great, it didn't make me cry, but it did make me very sad, for all involved (even Amelia).  I will admit I was happy to see Amelia choose Sam (who wouldn't, duh!) and be sad because she expected he'd be there.  I was happy that Benny thanked Dean for the ride, I thought that was a nice touch. Dean doesn't ever really get thanked much.  I wasn't surprised that Sam came in and handed Dean his beer and dinner, just relieved.  And that's how they looked.  Relieved that the fighting is over, that the choices have been made, and that they're back together.  Maybe not happy (yet), but comfortable. The basis for them being happy is there though, a few lighter hearted episodes and maybe they'll get there, we can hope right? 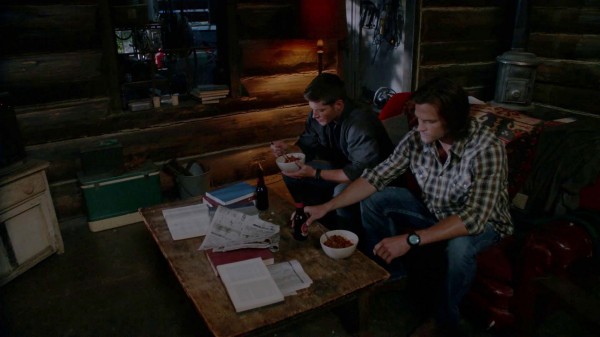 'm taking it as a good thing, that we see the green cooler of conversation is right there, anchoring them together in this last scene.  And it's also a good sign, that Sam is sitting right up against Dean, not up against his own end of the couch, not over at the kitchen table, or in another room.  It's almost like they're both admitting that they need that closeness, that it's normal and how things should be for them. It's how they get through this life they've chosen. Side-by-side up against the world.

(The screencaps are from

Here's my wish list from my last post just for reference, here's to getting to cross things off of lists!  I guess if Show doesn't cover them, then I will when I'm writing fic the rest of this season.