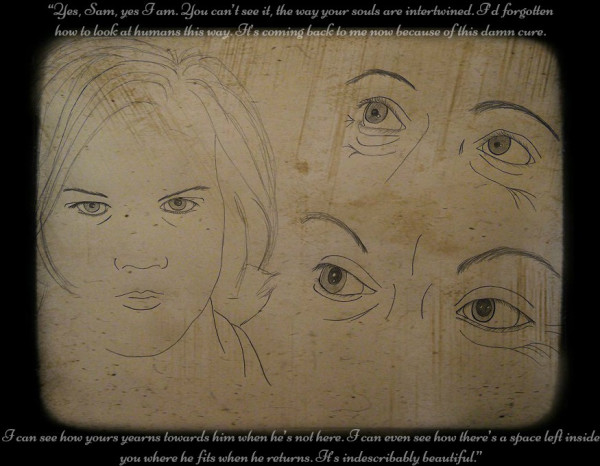 A conversation with Crowley

After Sam injected him for the final time, Crowley began to weep. “I just want to be loved. Like you love Dean and he loves you. Is that so wrong? To have someone that means everything to you, how can I ever come close to having that?”

“I don’t know, Crowley. I can’t explain it. That’s just how it’s always been for us. Honestly, I don’t know if it’s even possible for you. After you’re cured though, who knows, right? Maybe it’ll be like some cosmic do-over,” Sam said, patting at Crowley’s shoulder.

“Not only were you supposed to be the Boy King, but you got to spend your whole life with your soulmate. How lucky could one man be?” Crowley asked, staring up at Sam with some sort of admiration that made Sam deeply uncomfortable.

“No, really. How is that fair for one person?”

“I lost both of my parents, my girlfriend and was infected with demon blood as a baby. My whole life was arranged for the sole purpose of getting Lucifer out of the Cage. And you’re calling me lucky?”

“Yes, Sam, yes I am. You can’t see it, the way your souls are intertwined. I’d forgotten how to look at humans this way. It’s coming back to me now because of this damn cure. I can see how yours yearns towards him when he’s not here. I can even see how there’s a space left inside you where he fits when he returns. It’s indescribably beautiful.”

“When you say we’re intertwined, what do you mean?” Sam asked.

“Human souls have a form that demons can see, separate from their body. And most people’s are just boring little balls of light. But I’ve never seen soul mates before. And it’s…I really can’t describe it to you Sam, I wish I could. But when you say Dean’s everything to you. I can see exactly what you mean. And you are lucky, even with all the other crap. To have gotten to see this again, it’s just so beautiful, thank you, Sam.”  Crowley finished his monologue by bursting into tears once again.

Sam found it pathetic and uncomfortable to watch Crowley’s breakdown, but he couldn’t stop thinking about his description of their souls. It was strange to have someone he hated so much tell him something that he no idea that he needed to hear. After a year of feeling like he’d failed Dean at every turn, maybe this was the lasting legacy he’d be leaving behind for Dean. Maybe Dean would finally get a chance to have his soul be unsullied once Sam was gone. 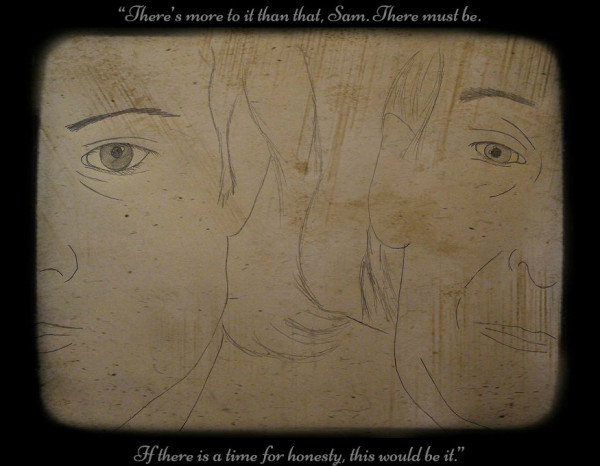 A conversation with Death

“Why do you stay with him?” Death asked.

Death didn’t have to specify the person he was referring to, Sam knew. The thought of Dean, who he’d just had to battle to come into this cabin for this very conversation was still thrumming through him. Leaving him behind had been one of the hardest things he’s ever had to do. “He’s everything, that’s why.”

“There’s more to it than that, Sam. There must be. If there is a time for honesty, this would be it.”

“Sam, how long have you felt this way about your brother?”

“As long as I can remember, maybe since I was five or six.”

“The entanglement of souls is always an interesting thing for me to witness. It’s so very rare and quite beautiful.  You know, when I returned your soul to you, I felt it then.  Your soul wasn’t just yours. It belongs to Dean also. And vice versa, obviously.  So, I can say that I understand and accept your answer, as well as I can.”

“Thank you, I appreciate hearing that from you. I’m not sure why exactly, but I do. No one has really ever understood me about my answer to that question.”

“Samuel Winchester, your brother is the one who needs to understand this, more now than ever, so that he’ll be able to let you go this time.”

“I know, he’s never really believed it. And now it’s kind of too late, isn’t it?”

“I suppose so. Well, we shall have to hope that he does not upset the balance once again.” Death stood up. “It is time Sam, shall we?” 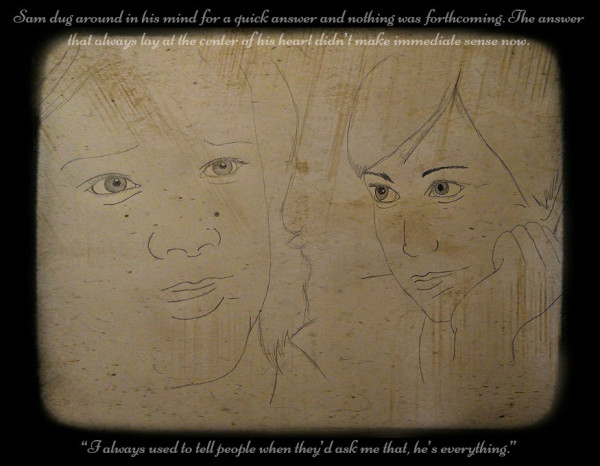 A conversation with Jody Mills

“We have something special, huh? You have no idea,” Sam scoffed.

“Well, tell me this, if you don’t think so, then why do you stay with him?”

Sam dug around in his mind for a quick answer and nothing was forthcoming. The answer that always lay at the center of his heart didn’t make immediate sense now. “I always used to tell people when they’d ask me that, he’s everything.”

“He…is…I guess. Just, a lot has changed. He’s done some stuff recently that, well I don’t want to get into it. But let’s leave it at that I’m having a hard time forgiving him or trusting him at this point.”

“Well, it is, sometimes anyway. Like now.  He saved me by doing something he knew I wouldn’t have wanted, and then he lied to me about it, and wouldn’t even apologize once I finally knew. In fact, he just left me, instead of sticking around to fight it out.”

“Wow. That’s pretty big for him. Dean leaving you? It’s hard to imagine him being such a chicken shit.”

“Yeah, it was an all-time low for him. And that’s saying something, believe me. I’m trying to work through it, but he won’t talk about it.”

“You said he saved you..like, from dying?”

“Yeah, I was definitely a goner. He actually interrupted my final conversation with Death.”

“You can talk to Death? Why am I still surprised when you tell me these things? Don’t bother answering that. So, did you ask yourself if you’d have done the same thing if the situation were reversed?”

“Yeah, and I told him that, I wouldn’t have done the same thing. Which he took the wrong way and assumed I meant that I would have just let him die. Which wasn’t at all what I was saying.”

“Sam, I wasn’t there, and I’m not you, but from what you just said, it sounds like you and Dean need some kind of counseling or something.”

Sam laughed, and even to his own ears it sounded slightly unhinged.

“No, I’m serious here. He’s still important to you, obviously. And you are to him. What you have is worth saving, worth working on. All I’m saying is, don’t give up on fixing things. It’s possible that it will be better. My husband and I had a few bad patches, once we even went to a counselor, and it helped, just to talk to someone neutral.”

“Good, that’s good, Sam. But I’m not exactly neutral here. Listen, I know you’re not going to see a counselor, and you wouldn’t be able to tell them half of this stuff anyway because they wouldn’t believe it. So ask yourself the question, ‘Do I want to stay with Dean and if so, why?’, if you can give yourself a good answer that you believe, then you’ll know what to do.” 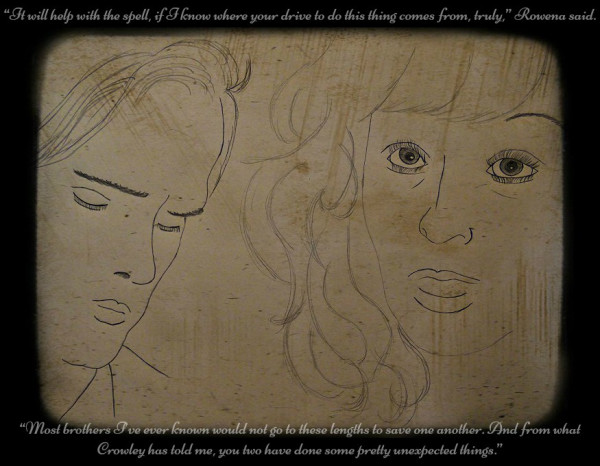 A conversation with Rowena

After he promised to kill Crowley for her, Rowena looked at him for an uncomfortably long amount of time.  “What now?” Sam snapped, tired of her teasing and posturing.

“This drive to save your brother, Samuel, just where does it come from, eh?”

“None of your business, just get this translated,” Sam insisted, pointing at the Book of the Damned lying on the table between them.

“It will help with the spell, if I know where your drive to do this thing comes from, truly,” Rowena said. “Most brothers I’ve ever known would not go to these lengths to save one another. And from what Crowley has told me, you two have done some pretty unexpected things.”

“I want to save Dean from the Mark, because he’s my brother. And by that I mean, he’s everything, Rowena, he is everything that is worth anything in this world to me. Is that enough for you?” Sam asked, cringing at having shared such a personal revelation with this loathsome woman.

“Oh that’ll do nicely, Samuel. Maybe we can work a Love’s True Kiss into the spell somewhere, eh?” Rowena teased.

Sam stormed out the door and slammed it behind him. He leaned up against it so he could still monitor her.  He wiped a few tears away, the frustration and need to save his brother becoming overwhelming, especially in the face of losing Charlie like that. It was all too much and not enough and he could never just make things right for them. No matter how hard he tried. But he couldn’t give up. 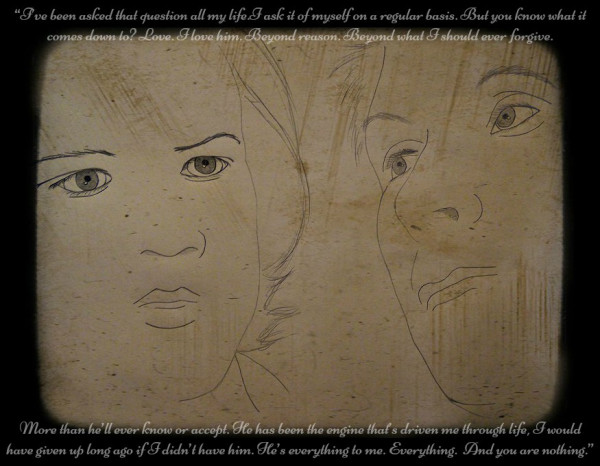 A conversation with Lucifer

“Sammy, Sam, Sam-I-Am, c’mon you know you wanna stay in here with me. Why would you ever go back to Dean? He’s the reason you’re in here, again, I might add.”

“I’ve been asked that question all my life. I ask it of myself on a regular basis. But you know what it comes down to? Love. I love him. Beyond reason. Beyond what I should ever forgive. More than he’ll ever know or accept. He has been the engine that’s driven me through life, I would have given up long ago if I didn’t have him. He’s everything to me. Everything.  And you are nothing.”

Lucifer shook his head in amazement at Sam’s answer. “Well shoot, when you put it like that, guess I’ve got nowhere to go with that line of thinking. But let me riddle you this: If you’re so sure about Dean, then why do you think he doesn’t believe you?”

“What he believes or doesn’t believe is not up to me. He’s got self-esteem issues that reminds me a lot of yours. And daddy issues that you’d definitely recognize. I gave up a long time ago trying to manage his beliefs and emotions, it’s pointless. As close as we are, he’s still a separate person.”

“You’ve grown up my young padawan. You were so full of anger when I last saw you here. What’s changed?”

“I was a lot angrier, you’re right. I think seeing Dean die a few times since then has taken it out of me, the anger’s gotten used up in a way. I spent a lot of time thinking about making use of the time we do have left together. I’m clearer now about my feelings for Dean and us and what we’re supposed to be doing.”

“Well, let me just tell you this then, and I don’t mean this as flattery, just as a true observation. Out of all the humans I’ve known, you come the closest to what my Father intended. I wish more of your kind were like you, it would have been easier to take my Father’s rejection if you’d all been so worthy. The grace you show in your forgiveness is something that shines the brightest of all.”

“I’m not sure what to say about all that, thanks, I guess. But what you think about me really doesn’t matter much to me at all. You’re not the one I’m doing all this for.”

“Man, Dean’s a lucky bastard and he doesn’t deserve you.”

“That’s where you’re wrong. Maybe you just don’t know him well enough, but he is a much better human being than I’ll ever be.”

“Maybe you’re right, you two saps deserve each other.”

“That mean you’ll back off and leave me alone while we’re stuck in limbo here?”