Dean woke up because he felt Sam leaving the bed, he reached out towards him in the darkness but Sam just hushed him and told him to go back to sleep. He tried for a while, but then he got curious, so he pushed up out of bed and wrapped his grey robe on and shuffled his feet around until he found his slippers under the desk. He padded down the hall towards Sam’s room and heard his voice. At first he thought he was talking to someone and worried that Vangelis had returned, but then he realized Sam was just praying. He crept a little closer to hear what he was praying about.

“Joshua, I don’t know if you can hear me or not. But thank you. And if you can, tell God thank you from me too. I knew we were done, it was feeling like we’d gone further than we were supposed to, maybe even pushing our luck, but I never knew how I’d get Dean to stop hunting without some catastrophic injury. And you’ve done it, in the best way possible. Thank you for letting us be together. It’s the best reward, the only reward I would have ever wanted.”

Dean made some footsteps-approaching-stealthily sounds hopefully covering up his shameless eavesdropping and tapped on Sam’s door. “Sammy, you okay?”

“Yeah, I was just looking at these,” Sam said, turning the garden shears over in his hands.

“Wonder if he actually used those in ‘The Garden’ or not,” Dean mused, putting a hand on Sam’s shoulder.

Sam turned them over several times and pointed out a few dings and dents in the shiny surface. “Looks like they’ve been used, but I couldn’t say where.”

“I’m going to make some coffee, you want some?” Dean asked, taking his hand off Sam’s shoulder and heading towards the door.

“Wait, uh…I have something for you,” Sam said, scooping something up out of his desk drawer. He stood with one clenched hand. “But I’m not sure if you want it or not. If you don’t, you well…you don’t have to—“ Sam rambled.

Dean grabbed Sam’s clenched fist. “If it’s from you, of course I want it.”

Sam looked at him, seeming to measure whether he was kidding or not and slowly unfolded his hand.

Seeing it there on Sam’s palm, winking at him like it had missed him, his old amulet, it was the best and worst feeling all at once. A contradictory flood of remorse and joy hit him all at once and he felt his knees almost buckle under the strain. But he held onto Sam’s hand, steadied himself and looked up into his brother’s eyes. Fear and worry changed into hope and joy on a steady cycle and Dean couldn’t take seeing Sam worry like that.

“You really want to give this to me again?”

“I do. I really do, Dean,” Sam said, serious as the vow he’d made yesterday to the daemon.

“Even after I threw it away, and all the shitty stuff I’ve pulled since then?” Dean asked, his stomach swooping with dread at the thought of all of the unforgivable things he’d done to Sam since throwing away this necklace.

“Yes, especially because of all of that, so you know I forgive you. And that you are who I choose, who I will always choose,” Sam said, echoing Dean’s words back to him.

Dean closed Sam’s fist back up around the amulet and held it with his own hand, stared up at Sam and tried as hard as he could not to tear up. A few escaped but no one said anything, he breathed as deeply as he could for a few moments to give himself time to come up with a good response. “I don’t know that I deserve this, Sammy. It means everything to me that you even still have it. But I don’t want us to be…hold on, I’ll be right back.” Dean dropped Sam’s hand and dashed out the door, and sped down the hall to his room. He pulled out a small metal lockbox from under his bed and got it open, pulling out something small and ran back down the hall to Sam.

Sam was sitting on his bed, pulled into a small hunched shape like he was trying to take up as little space in the world as possible. His shoulders were shaking, but there were no sounds. Dean approached the bed slowly and sat next to Sam.

“Can I see it again?” Dean asked when Sam finally looked up at him with a tear-streaked face.

Sam held his hand out and opened his fingers, the amulet lay in his palm, amidst some blood where Sam had clenched it hard enough to break open his skin. Dean took the amulet and kissed the places where Sam had cut himself, licking gently at the small wounds. Sam shivered at the feeling.

“Can I finish what I was saying, before I ran out like the world’s worst asshole?” Dean asked.

Sam didn’t say anything, just nodded and looked even more mournful if that was possible.

“Sammy, I’m sorry that you took this wrong. What I was starting to say was that I didn’t want us to be unequal with this, I wanted to give you something too. So that you have a reminder that you are who I choose, who I will always choose.” Dean opened his own fist then and his old silver ring lay there on his palm.

Sam reached out and took the ring from Dean and slipped it onto his left hand ring finger. Then he took the amulet from Dean who ducked his head. Sam slid the leather cord around his neck and settled it back where it belonged. Sam touched the amulet briefly like he couldn’t believe what he was seeing.

Dean held Sam’s hand and rubbed his thumb over the ring back and forth. “This was Mom’s, it was a ring her Dad gave her when she turned sixteen. He said it was an old family heirloom.”

“I didn’t know that, or that you still had it,” Sam said.

“Guess we both have a couple of secrets left,” Dean said, touching his amulet with a wonder-filled smile.

“That’ll give us something to do in our retirement,” Sam said.

“I’m really sorry, that I made you doubt me just now,” Dean said.

“I wasn’t doubting you, I was pretty sure I’d just screwed everything up again,” Sam said.

“No, I’m pretty sure you made it even better. So where are we going on our honeymoon, huh?”

“Well, I feel like we kinda got hitched, what with the angel and daemon pronouncements that we’re each other’s retirement. Trading jewelry, and all that, you know, the usual.”

“Guess it better be Cleveland then I guess,” Sam said.

“And the Rock and Roll Hall of Fame,” Sam said.

“I’ll book us a honeymoon suite somewhere nice, we can do it up right,” Dean said.

“You don’t need to do that stuff just to humor me, call it a honeymoon, or pretend we’re married,” Sam said.

“Why not? I thought for sure you’d like that kinda thing,” Dean asked.

“I guess, it’s just weird,” Sam said with a shrug that Dean was pretty sure meant Sam really did like it a whole lot but wasn’t cool with Dean giving him a hard time about it.

“Weirder than a daemon coming in here and pronouncing us retired?” Dean teased.

“No, that was definitely up there. Okay, Mr. Winchester, let’s do this,” Sam said, clapping his hands and turning away from Dean.

“After we come home from Cleveland, I want to plant a garden so I can actually use these things,” Sam said, scooping up the garden shears from the desk. He waved them in Dean’s direction, light winking off the silver ring he now wore.

Dean felt his face practically break apart from the smile he couldn’t stop, his beautiful brother there, waving everything he’d ever wanted right in front of him. He stepped forward and pulled Sam into an embrace, kissing him until they were both breathless. Dean took the shears from Sam and laid them back on the desk and pulled his brother back into bed. Their first day of retirement wasn’t over quite yet. 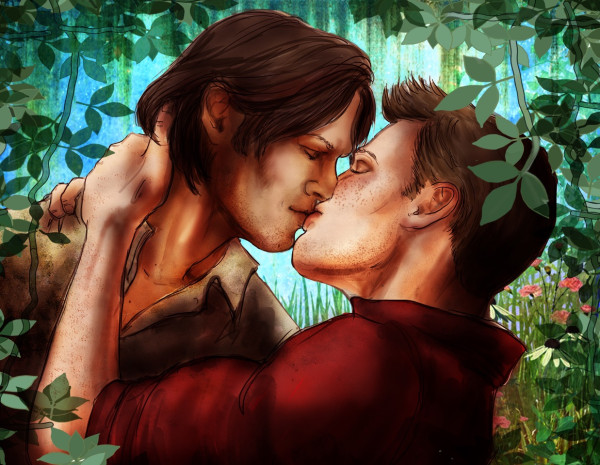